In my first post on ingredients to avoid, I mentioned parabens and sulfates.  Here are two more ingredients I’m trying to avoid or use sparingly and some reasons why.

Silicone (and other “cones”)  END_OF_DOCUMENT_TOKEN_TO_BE_REPLACED

This weekend I’m participating in a hair challenge.  All you have to do is shampoo, condition, comb through once and that’s it!  The point is to leave it alone – no heat, no leave-in conditioner, don’t put anything in it at all!  Siobhan and Alexandra, the beauties over at No More Dirty Looks, are even going to give away a prize at the end of the challenge!   END_OF_DOCUMENT_TOKEN_TO_BE_REPLACED

Finding and using a sulfate-free shampoo is not as much of a challenge as you might think.  More and more brands that we all know are coming out with a sulfate-free version of their product.  It might take you a bit of time to get used to shampoo without SLSs, but your scalp will thank you. END_OF_DOCUMENT_TOKEN_TO_BE_REPLACED

Yesterday I was at Target (what else is new?) and found a huge stockpile of new items on the beauty clearance endcap.  I bought the Tom’s Natural Moisturizing body wash, Tom’s Sensitive beauty bar and One Solid Shampoo Squeaky Clean for oily hair.  I used the body wash this morning before taking the pictures so that’s why it looks a bit used 🙂 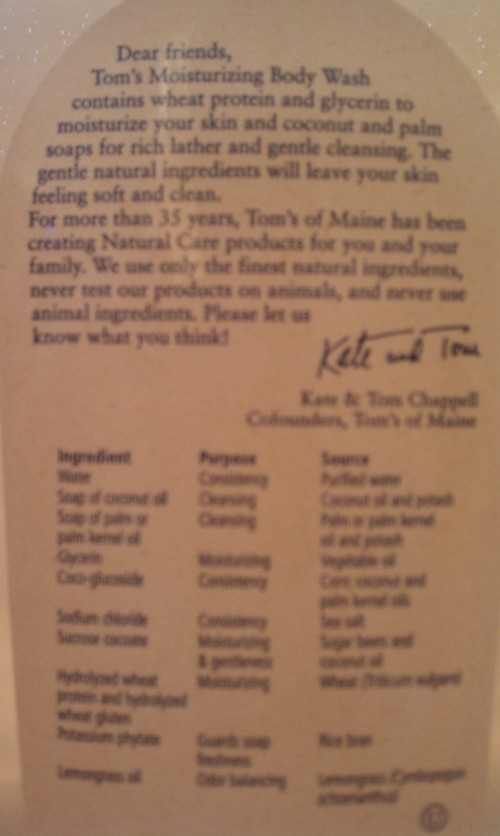 back of beauty bar package 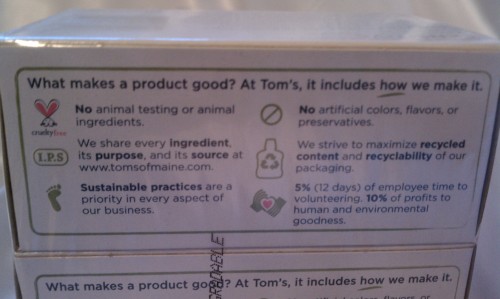 another side of the beauty bar package 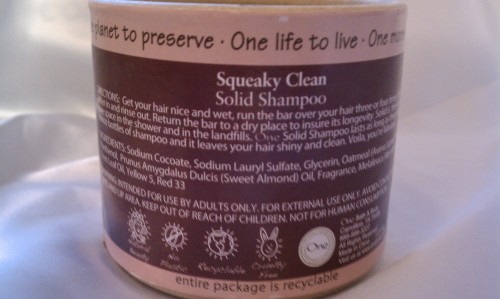 back of shampoo - animal friendly, no plastic, biodegradable, and cruelty free!

There were also a bunch of NP Set skincare items (lotions, scrubs, polishes, and body washes) that are paraben free.  So, hurry up and get to Target before it’s all gone! Then come back and let me know what you got  🙂

Below are descriptions of two of the ingredients I am trying to avoid or use very minimally.  As you can see, there are various health concerns associated with each one and I believe that any small step I can take to limit my exposure to these chemicals is worth it to me.

Parabens are a class of chemicals widely used as preservatives in the cosmetic and pharmaceutical industries. Parabens are effective preservatives in many types of formulas. These compounds, and their salts, are used primarily for their bactericidal and fungicidal properties. They can be found in shampoos, commercial moisturizers, shaving gels, personal lubricants, topical/parenteral pharmaceuticals, spray tanning solution and toothpaste. They are also used as food additives.

Their efficacy as preservatives, in combination with their low cost, the long history of their use, and the inefficacy of natural alternatives like grapefruit seed extract,[1] probably explains why parabens are so commonplace. They are becoming increasingly controversial, however, because they have been found in high concentrations in breast cancer tumors. [2] Parabens have also displayed the ability to weakly mimic estrogen (a hormone known to play a role in the development of breast cancer).[2] No causal link between parabens and cancer has been established, however.[3]

Both Sodium Lauryl Sulfate (SLS) and its close relative Sodium Laureth Sulfate (SLES) are commonly used in many soaps, shampoos, detergents, toothpastes and other products that we expect to “foam up”. Both chemicals are very effective foaming agents, chemically known as surfactants.

In fact, SLES is commonly contaminated with dioxane, a known carcinogen.

A report published in the Journal of The American College of Toxicology in 1983 showed that concentrations as low as 0.5% could cause irritation and concentrations of 10-30% caused skin corrosion and severe irritation.

In the same way as it dissolves the grease on car engines, sodium lauryl sulfate also dissolves the oils on your skin, which can cause a drying effect. It is also well documented that it denatures skin proteins, which causes not only irritation, but also allows environmental contaminants easier access to the lower, sensitive layers of the skin.

Perhaps most worryingly, SLS is also absorbed into the body from skin application. Once it has been absorbed, one of the main effects of sodium lauryl sulfate is to mimic the activity of the hormone Oestrogen. This has many health implications and may be responsible for a variety of health problems from PMS and Menopausal symptoms to dropping male fertility and increasing female cancers such as breast cancer, where oestrogen levels are known to be involved.

Are you aware of a lot of the ingredients in your beauty products?  Is there anything you try to avoid?

On my last update, I told you about how I had actually only finished nine products instead of ten.  Well since then, I’ve finished up TEN more products and I’m back to tell you about them.  Only one is a repeat and that is Herbal Essences Totally Twisted scrunch gel so I won’t mention that one again. Here is the list:

Have you seen the Story of Cosmetics video yet? If not, please take a few minutes to watch it below.

Surprised? So was I. Annie Leonard’s message in the video shocked me and made me really think twice about the products I expose myself to.  Personally, my family has been affected by cancer more than once.  Both of my parents have had “run in’s” with skin cancer and my mom later passed away from breast cancer.  Because of this (and other reasons mentioned in the video) I have chosen to reduce the amount of toxins, chemicals, and artificial fragrances I expose myself to.

This will obviously affect this blog as well.  I have already changed the name of the blog from “Makeup, Beauty, and Gossip” to “Beauty Lite”.  I think that more accurately captures the vibe of what it will be about.  I am going to be blogging about my transition from using beauty products and cosmetics full of toxins to more pure products.  I can’t guarantee there won’t be fumbles and missteps along the way, that’s just all part of the journey, and I really hope you’ll join me.  Thank you!

Annie Leonard: Why We Made “The Story of Stuff”

What can you do to help?

Campaign for Safe Cosmetics Act of 2010 – send an email to Congress, I did!